Teaming Opportunities in Research: How geological fieldwork on Guam helps to get a better understanding of a global tectonic plate reorganization 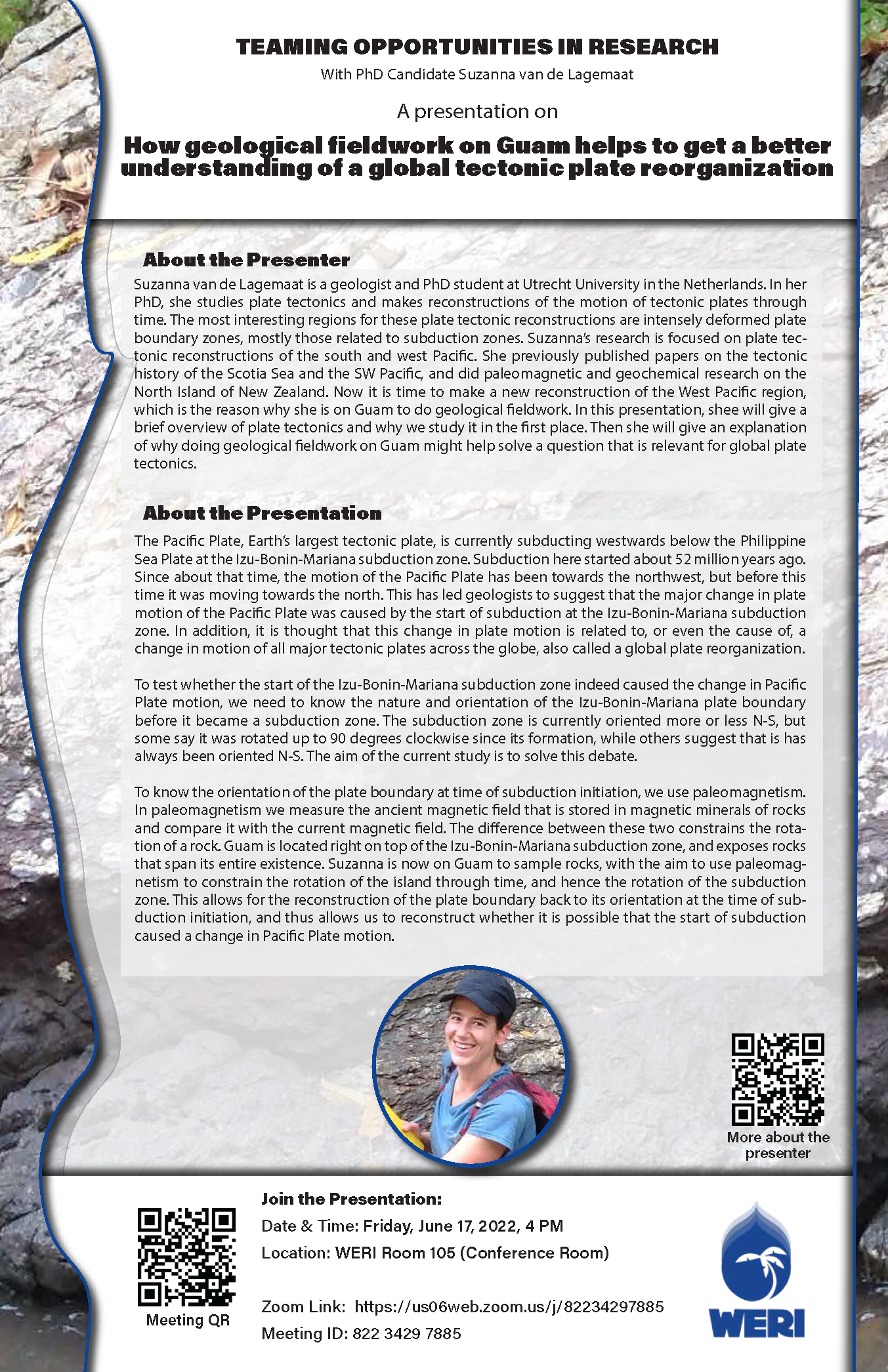 The Pacific Plate, Earth’s largest tectonic plate, is currently subducting westwards below the Philippine Sea Plate at the Izu-Bonin-Mariana subduction zone. Subduction here started about 52 million years ago. Since about that time, the motion of the Pacific Plate has been towards the northwest, but before this time it was moving towards the north. This has led geologists to suggest that the major change in plate motion of the Pacific Plate was caused by the start of subduction at the Izu-Bonin-Mariana subduction zone. In addition, it is thought that this change in plate motion is related to, or even the cause of, a
change in motion of all major tectonic plates across the globe, also called a global plate reorganization.

To test whether the start of the Izu-Bonin-Mariana subduction zone indeed caused the change in Pacific Plate motion, we need to know the nature and orientation of the Izu-Bonin-Mariana plate boundary before it became a subduction zone. The subduction zone is currently oriented more or less N-S, but some say it was rotated up to 90 degrees clockwise since its formation, while others suggest that is has always been oriented N-S. The aim of the current study is to solve this debate.

Suzanna van de Lagemaat is a geologist and PhD student at Utrecht University in the Netherlands. In her PhD, she studies plate tectonics and makes reconstructions of the motion of tectonic plates through time. The most interesting regions for these plate tectonic reconstructions are intensely deformed plate boundary zones, mostly those related to subduction zones. Suzanna’s research is focused on plate tectonic reconstructions of the south and west Pacific. She previously published papers on the tectonic history of the Scotia Sea and the SW Pacific, and did paleomagnetic and geochemical research on the North Island of New Zealand. Now it is time to make a new reconstruction of the West Pacific region, which is the reason why she is on Guam to do geological fieldwork. In this presentation, she will give a brief overview of plate tectonics and why we study it in the first place. Then she will give an explanation of why doing geological fieldwork on Guam might help solve a question that is relevant for global plate tectonics.

More About the Presenter

Missed the meeting? Watch the fill video below: